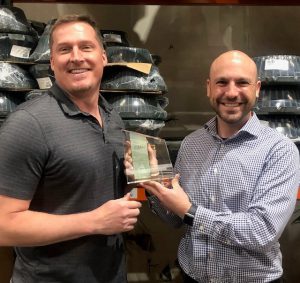 Josam Company recognizes RKR Manufacturer Representatives with the 2018 President’s Award. RKR is defined by their commitment to work as a team and more importantly to realize that success isn’t a single account, but a series of determined steps towards success. The team at RKR view success not as an accident, but a result of determined actions, continued effort, and consistent follow through. When RKR joined the Josam family in 2010, they looked at commercial drain line as a backbone to a strong commercial rep agency. They were very deliberate about how a drain line can be leveraged to the success of all their lines. Their message to the market is evident in everything they do, “we want to earn your business” and “we are looking for long term partners”. Their passion for success combined with a truly dedicated leadership team and committed sales force is their secret sauce. Congratulations to everyone at RKR!