Having been involved in the rep business in Texas for many years as a sales associate and partner, in 1989 Harry May established his own manufacturers rep firm, Mayco Sales Company Inc. Many manufacturers saw the potential that Harry May had as a business owner and he was able to secure seven lines to start his business. Having worked with his father in the industry since 1985, Harry’s son Michael joined the Mayco Sales as Vice President in 1989 and shortly after that, Harry’s youngest son, Aaron, joined the company after graduating from college. In January of 2010, Harry retired and confidently turned the company over to Michael and Aaron. Today Mayco Sales represents 16 prominent manufacturers in Northern Texas. 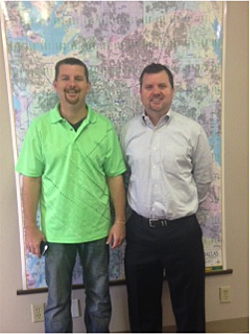 Although somewhat new as a Josam representative, Mayco having represented Zurn products from 1989 to 2012, has extensive experience in the drain market and has established themselves as a premier drain representative in the Northern Texas marketplace. Michael attributes his success as a drain rep to his extensive knowledge of drains and the relationships that his father, Aaron and he have established. Michael states, “Our industry has high standards for a drain rep, including knowing your product and your competitors’ as well and we at Mayco are committed to living up to those standards. Some people think that drains just get lumped in with the fixtures but that rarely is the case, this is where working hard to establish relationships pay off! You can give a drain line to any rep, but if they don’t have relationships both at the contractor and wholesaler level, they will not be successful.”

Michael considers representing a leader like Josam as the starting point for a strong package to offer to his customers. The Mayco team has also developed strong relationships with the engineering community. “It starts with the specification and the relationship with the engineers. The pull through of the package comes at the contractor level and a dominant drain line like Josam give us the ability to drive business through the contractor to the wholesaler. The final piece to our success is the relationship at the wholesale level. The wholesaler relationships are key to bundling our package and selling all of our lines on each project. These relationships teamed with unsurpassed support allow us to continue to be successful. Josam Company has fully supported us with every tool that we need to be successful including inventory, customer service, competitiveness and quality products.”

Michael adds, “The market has a level of confidence with Mayco Sales. That confidence matched with a top and supportive drain manufacturer like Josam, allows us to be a successful representative agency.”

Josam’s Vice President of Sales and Marketing, Paula Bowe, stated “If you looked up the definition of a drain rep, you would find Mayco Sales. Mayco’s extensive knowledge of drains, dedication to service and the relationships that they have established make Josam proud to have them as one of their leading representatives. As one of their top income lines, Josam means something to the Mayco team and their firm is a great example of how to be a successful drain rep. The team of Josam and Mayco Sales is without doubt a winning combination.”